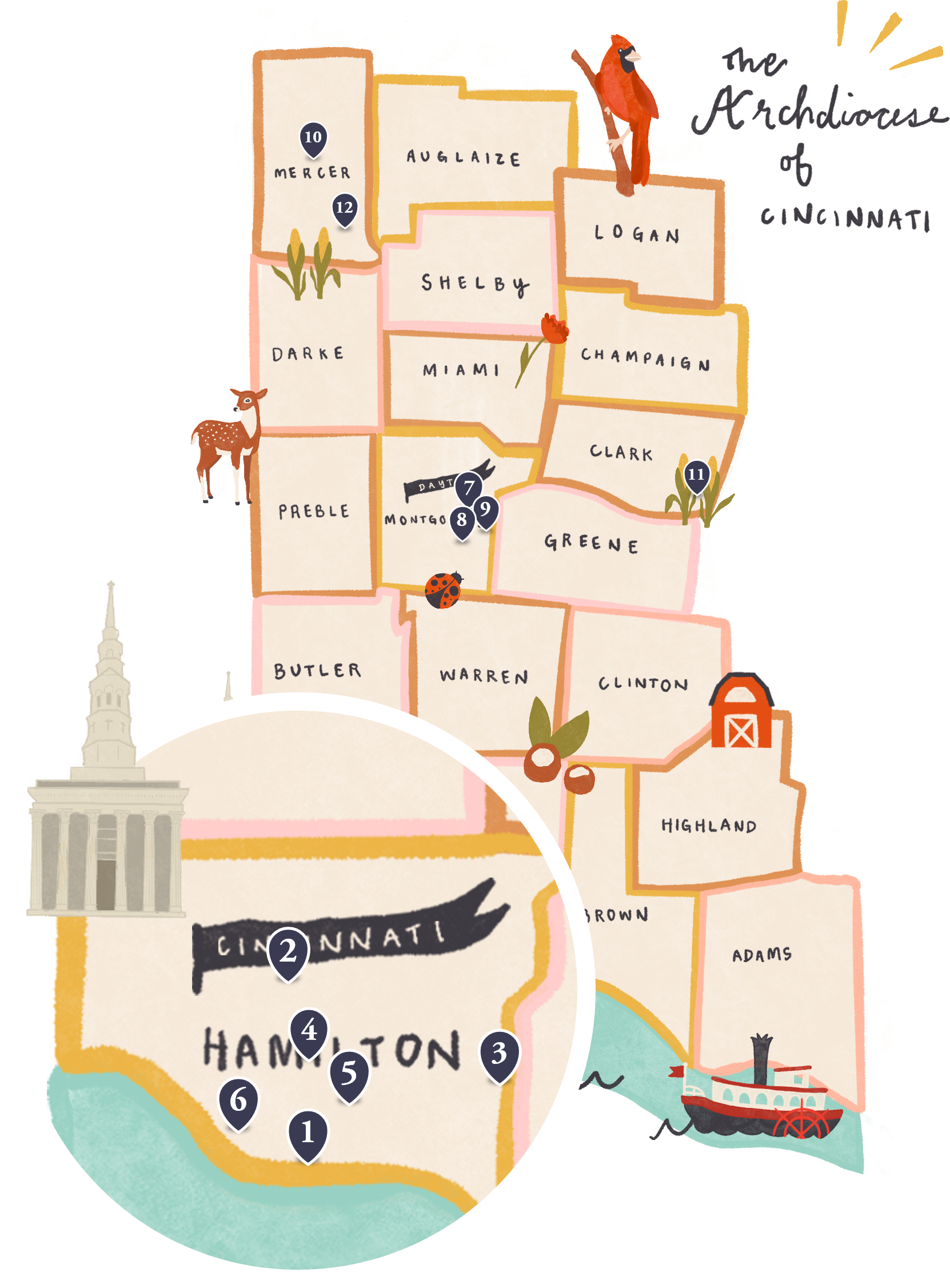 DISCOVER 200 YEARS OF BEAUTY AND HISTORY

From the Cathedral Basilica of St. Peter in Chains to the Maria Stein Shrine, the second largest holy relic collection in the United States and the epicenter of the historical “Land of the Cross-Tipped Churches,” the Archdiocese of Cincinnati is filled with 200 years of stories, architecture and landmarks of faith. Click on the map markers to discover 360-degree virtual tours, historical guides and fascinating highlights from some of the most interesting Catholic locations in Western and Southwestern Ohio.

The cathedral’s construction began May 20, 1841. It was dedicated more than four years later on November 2, 1845. The church was designed by Henry Walter, who also designed the capitol building in Columbus, Ohio. Walter crafted a great square tower, rising 221-feet up from the foundation, surrounded by a colonnade of 12 pillars on three sides. The colonnade reproduces the Corinthian order found on the Horologium Adronikos Cyrrhestes, built at Athens in 35 B.C. In 1957, a massive renovation and expansion was conducted by architect Edward Schulte, one of Cincinnati’s and the nation’s great church designers. The design won him the prestigious Sachs Prize from the Cincinnati Art Institute. The Cathedral of St. Peter in Chains was placed on the National Register of Historic Places in 1973.

St. Boniface Parish was established when St. Aloysius Church grew so large that the congregation needed to split and form a second parish. It was decided that the Irish community would retain the original church property, renaming the parish St. Patrick. The German community received funds to build a new church. The first church was completed in November 1863. To accommodate the growing church population, the present church was completed in 1927. One hundred thirty years after the decision to divide St. Aloysius Parish, St. Boniface and St. Patrick were reunited. In December 1991, St. Patrick Parish closed its doors and processed the statue of their patron to the doors of St. Boniface. In addition to the statue of St. Patrick and one of St. John Vianney, the parishioners of St. Patrick also brought their magnificent marble altar with them. The architects who designed St. Boniface Church modeled the building after the Basilica of St. Paul Outside the Walls in Rome. The 40-foot tall baldachin serves as a canopy over the main altar, protecting the Holy Eucharist. Murals of watchful angels surround the altar.

St. Cecilia Church was dedicated in 1928. Its Deco-Gothic edifice was built by noted Cincinnati church architect Edward Schulte. Repairs to the steeple were conducted in the 1950s. Columns and rounded arches support the clerestory with its 16-foot high stained glass windows. A large triptych depicting Jesus as the Alpha and the Omega, accompanied by images of the resurrection, Pentecost and the Coronation of the Blessed Virgin Mary, reside behind the altar.

Located in the heart of Over-the-Rhine, Old St. Mary’s Church holds tightly to its German heritage. Dedicated in 1842, it is one of the oldest standing churches in the archdiocese. Its cornerstone was laid on March 25, 1841, following a procession that included Bishop Purcell, priests of the city and seminarians. There were 10,000 people present for the historic event. Inside the church, behind the high altar, hang oil paintings from Prague and Germany depicting events in the life of the Blessed Virgin Mary. The paintings are rotated according to the liturgical season. In 1890, arches were formed above the windows and along the ceiling as part of a major renovation for the jubilee year celebration. Throughout the church are shrines dedicated to the titles and apparitions of the Blessed Virgin Mary. The priests of the Oratory of St. Philip minister to the parish offering Mass in English and German, as well as the Traditional Latin Mass. The church was placed on the National Register of Historic Places in 1976.

Holy Family Parish was established in 1883 to help offset the overcrowding at St. Lawrence Church in Price Hill. In the early 1900s, the church filled to capacity again, and the parish enlarged its space. The present church was designed in the Romanesque Renaissance style and was completed in May 1916. Following World War II, muralist Gerhard Lamers decorated the interior of Holy Family Church as part of a renovation. The dome over the pews is a stunning display of Christ the King at the center, with the 12 apostles, eight beatitudes and four cardinal virtues surrounding Him. Murals of the seven sacraments, the Resurrection and the Ascension are painted behind the altar.

OUR LADY OF THE ROSARY

Our Lady of the Rosary Parish’s first church, which now houses part of the school, was built in 1888. The present church, designed by architect W. L. Jaekle, was erected in 1918. Our Lady of the Rosary Church is a magnificent example of the Romanesque Revival Style. The high altar and baldachin are elaborately carved from white marble. Above the altar is a mural of the Blessed Virgin Mary giving the Rosary to St. Dominic and St. Catherine of Siena. In the arch in front of this are five small murals of the Joyful Mysteries of the Rosary crown the apse.

By the mid-1800s, Dayton’s German population quickly outgrew the city’s Catholic churches and Germans wanted a parish that would reflect their unique devotional practices. In 1859, St. Mary Church was founded for them. The current church was completed in 1906. Golden stenciling, vaulted ceilings and depictions of angels in adoration line the interior of St. Mary Church. Images of the life of the Blessed Virgin Mary are spread throughout. Since 1951, the parish has annually hoisted a 16-foot star between the twin towers of the church to illuminate the Christmastime sky. The church was placed on the National Register of Historic Places in 1983.

Holy Family Church was completed in 1926. A prominent feature inside the church is the dome of the apse. The Holy Family is depicted, with Jesus flanked by St. Joseph and the Blessed Virgin Mary on one side and Sts. Anne and Joachim on the other. To his right are Sts. Anne and Joachim. Angels gather above them and more than 20 saints complete the mural. In 2010, Holy Family Parish was entrusted to the Priestly Fraternity of St. Peter and the parish again began celebrating Latin Masses.

Both the exterior and interior of Immaculate Conception Church are awe inspiring. This Romanesque Revival church, completed in 1903, is topped with a massive dome. Stained glass windows throughout the church honor the life of our Blessed Mother. Additionally, more than 15 saints are depicted in the stained glass windows along with symbols of the Eucharist. The church has undergone many renovations since its founding, including repair from tornado damage in 1986. The church was most recently renovated in 2003 in order to preserve and restore original artwork, decoration and fixtures. Immaculate Conception Church was added to the National Register of Historic Places in 1979.

The current St. Charles Borromeo Church was completed in 1907. Forty-one years after its completion, Gerhard Lamers, a German artist who decorated many churches in the archdiocese, added beautiful murals in the apse and on the ceiling of the church. Painted on the dramatic vaulted ceilings are eight saints framed by medallions. The high altar and side altars are original to the church.

Maria Stein was built as a convent and later served as the motherhouse for the Sisters of the Precious Blood until 1923. The convent and chapel were designed by Anton DeCurtins and decorated by his sons. In 1875, the Sisters of the Precious Blood received a large number of relics, which they added to their existing relic collection. Today, Maria Stein Shrine of the Holy Relics is home to one of the largest relic collections in the world. Maria Stein is a gem of the archdiocese, and for visitors it is a place of spiritual nourishment, beauty and communion with those who have gone before us. The shrine was added to the National Register of Historic Places in 1979.